Since the launch of the KINDLE Project in December 2015, members of the Palliative Care Research Network (PCRN) have been kindly contributing their dissemination output to the KINDLE database. In addition, the KINDLE team have been carrying out a purposive structured search to identify further materials in the literature. At present, a total of 168 dissemination materials have been collected ranging from abstracts to protocols to tweets and newspaper articles. These materials are a great reflection of the work being done by the PCRN and only represent a snapshot of the work to come once these projects has ceased. Researchers are increasingly engaging in knowledge transfer throughout the lifespan of a project rather than as an afterthought once data analysis has been complete and the volume of products from the PCRN, at this stage of the research, reflects this trend. Figure 1 provides an overview of the types of dissemination materials currently available from the PCRN.

Traditional forms of dissemination were the most popular means of engaging in knowledge transfer and exchange with peer-reviewed papers topping the list of dissemination products, followed closely by conference presentations. Avenues that would be more skewed toward the general population such as social media were not highly utilised, for example there were only 9 tweets pertaining to projects from the PCRN. Internal progress reports and protocols were also common forms of dissemination at present, though this was unsurprising given the stage that the projects are at. 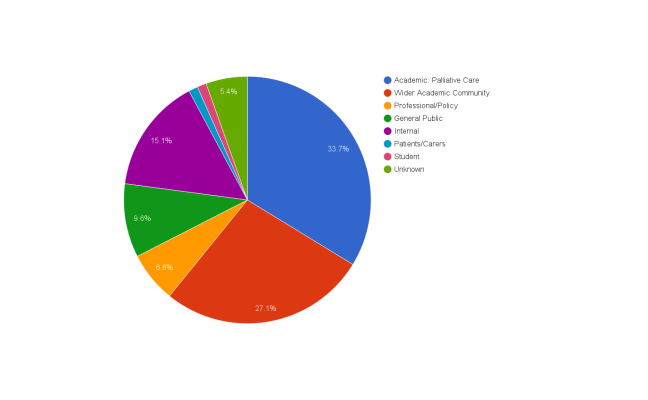 It should be noted that a journal article was considered to be targeting academic audiences only. It is widely accepted that knowledge users do not read academic journals and researchers must re-package their findings to ensure that they reach users of knowledge. Despite the fact that access to such articles is restricted through pay-walled journals which many users do not have access to, journal articles typically contain complex information and jargon that isolates those who do not use such language in everyday practice. Moreover, researchers are generally (understandably) cautious about over-interpreting findings from a single study for risk of being accused of unscientific behaviour. These factors (and possibly many more) widen the gap between academic research and those who should be benefitting directly from it. A myriad of new avenues of communication have emerged in recent years to assist researchers with the complex task of communicating with knowledge users in a coherent manner.

One issue that struck us when conducting the search of the literature was the dissemination output that emerged which was indirectly related to the projects. That is, papers outlining a topic that is closely related to the project and written during the lifespan of the project but not a direct output of the project (i.e. not reporting on results of the project). Indeed, figure 3 below demonstrated how 17.3% of the materials were such indirect products. Academic work is rarely conducted in isolation and individual outputs from a single researcher are always more than the sum of their parts. It is difficult to disentangle the impact of one piece of work on another however, it is unlikely that different projects conducted by a single researcher would not inform one another, particularly if they are related topics. Thus it stands to reason that such materials while not a direct output of the PCRN projects are contributing, and gaining from, a wide network of learning from each member’s knowledge base.

The KINDLE database is a testament to the work of the PCRN and the efforts made to disseminate the learning that is continually emerging from the network. With the creation of the database, the next step in the KINDLE project will be the beginning of the review of the materials followed by the thematic synthesis. We would like to thank all members of the PCRN and beyond who have contributed to the KINDLE database and look forward to providing you continual updates on the project.